Please refer to the Class 11 Physics Sample Paper for the current academic year given below. We have provided the latest CBSE Sample Papers for Term 1 and Term 2 for Physics Class 11. All guess sample papers have been prepared based on the latest blueprint and examination pattern for the current year. All sample papers for Physics Class 11 Term 1 and 2 have been given with solutions. Students can access the multiple guess papers given below. Practicing more Class 11 Physics Sample Papers will help you to get more marks in upcoming exams.

2. Identical springs of steel and copper are equally stretched. On which, more work will have to be done?
Answer : Work done to stretch a spring is given by

OR
A spring is stretched by applying a load to its free end. What type of strain produced in the spring?
Answer : Longitudinal and Shearing Strain is produced in spring.

3. When we start filling an empty bucket with water, the pitch of sound produced goes on changing. Why?
Answer : A bucket may be regarded as a pipe closed at one end. It produces a note of frequency,
v = v/4L
where v is the velocity of sound in air and L is the length of air column, which is equal to depth of water level from the open end. As the bucket is filled with water, the value of L decreases. Consequently, the frequency and hence the pitch of the sound produced goes on changing.

4. Two particles execute S.H.M. of same amplitude and frequency along the same straight line. They pass one another when going in opposite directions, each time their displacement is half of their amplitude. Find the phase difference between them.
Answer :

OR
Displacement versus time curve for a particle executing SHM is as shown in figure.

8. The motion repeated in equal interval of time is called the periodic motion. The smallest interval of time after which the motion repeats itself is called its time period (T). The reciprocal of T gives the number of repetition occurs per unit time which is termed as frequency of periodic motion. The functions which are used to represent periodic
motion are called periodic functions i.e., f(t) = A cos ωt.
As the function will repeat itself after time period T therefore f(t) = f(t + T) = f(t + 2T) = …………………. where, {T = 2π/ω}
Periodic functions can also be expressed as a linear combination of sine and cosine function i.e.,
f(t) = A sinwt + B cos ωt. In periodic motion, displacement refers to change in physical property like amplitude of sound wave, changing electric and magnetic fields etc.

9. Derive the P-V relation for a monatomic gas undergoing an adiabatic process.
Answer : From first law of thermodynamics,

OR
A gaseous mixture contain 32 g of helium and 32 g of oxygen, then calculate the ratio of CP/CV of the  mixture.
Answer :

11. Water on a clean glass plate spreads into a thin film but a small amount of water placed on a flat surface of wax forms into drops. Why?
Answer : The force of adhesion between the molecules of water and glass is more than the force of cohesion between the water molecules. Thus, when water is dropped on the glass plate, it spreads on it. On the other hand, the force of cohesion between water molecules is more than the force of adhesion between water and wax molecules. Thus, on account of this higher force of cohesion, water instead of spreading on wax forms into drops.
OR
Bernoulli’s theorem holds for incompressible, non-viscous fluids. How this relationship changed when the viscosity of fluid is not negligible?
Answer : The effect of viscosity, which is internal friction in case of fluids, is to dissipate mechanical energy of the fluid into heat. Thus, in case the viscosity of a fluid is not negligible, the quantity P + rgh + (1/2)pv2 goes on decreasing along the direction of flow of the fluid.

13. A U tube with both ends open to the atmosphere, is partially filled with water. Oil, which is immiscible with water, is poured into one side until it stands at a distance of 10 mm above the water level on the other side. Meanwhile the water rises by 65 mm from its original level (see diagram). The density of the oil is

14. An air bubble of diameter 2 mm rises steadily through a solution of density 1750 kg m–3 at the rate of 0.35 cm s–1. Calculate the coefficient of viscosity of the solution. The density of air is  negligible.
Answer :

15. Let n moles of an ideal gas in a cylinder of unit cross section with a piston attached as shown in figure. A spring of spring constant K is attached (unstretched length L) to the piston and to the bottom of the cylinder. Initially the spring is unstretched and the gas is in equilibrium. A certain amount of heat Q is supplied to the gas causing an increase of volume from Vo to V

OR
(a) One mole of an ideal gas undergoes a cyclic process ABCD A as shown in the P-V diagram,

What is the net work done in the process ? (1 atm = 106 dyne cm–2)
(b) A sample of an ideal monatomic gas is taken round the cycle ABCA as shown in figure. What is the work done, during the cycle ?

OR
Two sitar strings A and B playing the note ‘Ga’ are slight out of tune and produce beats of frequency 6 Hz. The tension in the string A is slightly reduced and the beat frequency is found to reduce to 3 Hz. If the original frequency of A is 324 Hz, what is the frequency of B ?
Answer : 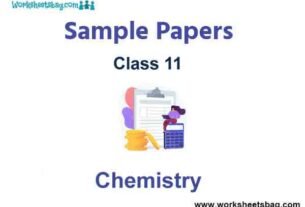