Please refer to the Class 12 Chemistry Sample Paper for the current academic year given below. We have provided the latest CBSE Sample Papers for Term 1 and Term 2 for Chemistry Class 12. All guess sample papers have been prepared based on the latest blueprint and examination pattern for the current year. All sample papers for Chemistry Class 12 Term 1 and 2 have been given with solutions. Students can access the multiple guess papers given below. Practicing more Class 12 Chemistry Sample Papers will help you to get more marks in upcoming exams.

2. What is shape selective catalysis?
Answer. Catalysis which depends on the shape and size of the reactants and the products and to those of the pores and cavities of catalyst.

3. Amongst the isomeric alkanes of molecular formula C5H12, identify the one that on photochemical chlorination yields a single monochloride.
Answer. Neopentane or 2,2-Dimethylpropane

7. The following curve is obtained when molar conductivity (Λm) is plotted against the square root of concentration, C1/2 for two electrolytes A and B

10. (a) Predict the major product of acid catalysed dehydration of 1-Methylcyclohexanol.
(b) You are given benzene, conc.H2SO4, NaOH and dil.HCl. Write the preparation of phenol using these reagents.
OR
Draw the structures of any two isomeric alcohols (other than 1° alcohols) having molecular formula C5H12O and give their IUPAC names.
Answer. (a) 1-Methylcyclohexene

14. Answer the following questions :
(a) What happens when a freshly precipitated Fe(OH)3 is shaken with a little amount of dilute solution of FeCl3?
(b) Why are lyophilic colloidal sols more stable than lyophobic colloidal sols ?
(c) What form Freundlich adsorption equation will take at high pressure ?
Answer. (a) A reddish brown positively charged colloidal sol is obtained.
(b) Stability of lyophilic sols is due to :
(i) same charge on all the colloidal particles.
(ii) solvation of the colloidal particles.
(c) At high pressures, amount of gas adsorbed (x/m) becomes independent of pressure (p).

15. What chemical principle is involved in choosing a reducing agent for getting the metal from its oxide ore? Consider the metal oxides, Al2O3 and FeO and justify the choice of reducing agent in each case.

OR
Account for the following facts :
(a) The reduction of a metal oxide is easier if the metal formed is in the liquid state at the temperature of reduction.
(b) Limestone is used in the manufacture of pig iron from haematite.
(c) Pine oil is used in the froth floatation process used to concentrate sulphide ores.
Answer. The feasibility of thermal reduction can be predicted on the basis of Ellingham diagram. Metals for which the standard free energy of formation (ΔfG°) is more negative can reduce those metals for which ΔfG° is less negative. At a given temperature, any metal will reduce the oxide of other metals which lie above it in the Ellingham diagram.
(a) Below the temperature approx 1623 K, corresponding to the point of intersection of Al2O3 and MgO curves, Mg can reduce alumina.
(b) At temperatures between 673 K and 1073 K, the CO , CO2 line lies below Fe, FeO line, thus CO can reduce FeO to Fe. At temperatures above this temperature, coke will reduce FeO and itself get oxidised to CO.
OR
(a) Entropy is higher when a metal is in the liquid state than when it is in the solid state. Thus, TΔS° increases, thus, ΔG° becomes more negative and the
reduction becomes easier. (ΔG° = ΔH° – TΔS°) (b) Limestone provides the flux (CaO) which combines with the impurities (SiO2) to form slag (CaSiO3). Thus, it helps in the removal of impurities.
(c) Pine oil (collector) enhances the non wettability of the ore particles, which become lighter and hence rise to the surface along with the froth.

17. (i) Describe the type of hybridisation for the complex ion [Fe(H2O)6]2+.
(ii) Write the IUPAC name of the ionisation isomer of the coordination compound
[Co(NH3)5Br]SO4. Give one chemical test to distinguish between the two compounds.
Answer. (i) Fe exists as Fe2+. There are 4 unpaired electrons.

18. (a) Explain why the dipole moment of chlorobenzene is lower than that of cyclohexyl chloride.
(b) An optically active compound having molecular formula C7H15Br reacts with aqueous KOH to give a racemic mixture of products. Write the mechanism involved in this reaction.
Answer. (a) Due to greater s-character, a sp2 hybrid carbon is more electronegative than a sp3 hybrid carbon. Therefore, the sp2 hybrid carbon of C-Cl bond in chlorobenzene has less tendency to release electrons to Cl than a sp3 hybrid carbon of cyclohexyl chloride.

(b) Since the alkyl halide reacts with KOH to form a racemic mixture, it must be a 3° alkyl halide and the reaction will follow SNl mechanism.

19. Give the structures of A, B and C in the following reactions :

20. (a) A non reducing disaccharide ‘A’ on hydrolysis with dilute acid gives an equimolar mixture of D-(+)-glucose and D-(–)-Fructose.

Identify A. What is the mixture of D-(+)-glucose and D-(–)-fructose known as? Name the linkage that holds the two units in the disaccharide.
(b) a-amino acids have relatively higher melting points than the corresponding halo acids. Explain.
Answer. (a) A–Sucrose (C12H22O11)
The mixture of D-(+)-glucose and D-(–)-fructose is known as invert sugar.
The linkage which holds the two monosaccharide units through oxygen atom is called glycosidic
linkage.
(b) The amino acids exist as dipolar zwitter ion. Due to this dipolar salt like character they have strong dipole attractions. Thus, their melting points are higher than the corresponding haloacids which do not exist as zwitter ions.

21. (a) Pick out the odd one from among the following on the basis of their medicinal properties mentioning the reasion : Luminal, Seconal, Phenacetin, Equanil.
(b) Give an example of a substance that can act as a disinfectant as well as antiseptic depending upon its concentration. (Specifiy
concentration)
(c) Name any two macromolecules chosen as drug targets.
Answer. (a) Phenacetin is an antipyretic, while the rest are tranquilizers.
(b) 0.2% solution of phenol acts as antiseptic whereas 1% solution of phenol acts as disinfectant.
(c) Carbohydrates and proteins

22. The following is not an appropriate reaction for the preparation of tert-butyl ethyl ether :
C2H5ONa + (CH3)3C Cl → (CH3)3C OC2H5
(i) What would be the major product of the given reaction?
(ii) Write a suitable reaction for the preparation of tert-butyl ethyl ether, specifying the names of reagents used.
Justify your answer in both cases.
Answer. (i) Since the alkyl halide is a 3° halide and C2H5ONa is strong base, therefore, elimination occurs preferably. The product obtained is 2-methylprop-1-ene. CH3C(CH3) CH2
(ii) To prepare tert-butyl ethyl ether, the alkyl halide should be 1° i.e., chloroethane and the nucleophile should be sodium tert-butoxide because the 3° nucleophile is able to attack 1° alkyl halide.
(CH3)3CO–Na++CH3CH2Cl→(CH3)3COCH2CH3

23. Study the given passage carefully and answer the questions that follow :
Shalini studied a chapter on polymers in school and came across the following paragraph :
The durability, strength, low cost, water and chemicals resistance and light weight are advantages of plastic bags.
Shalini is confused as she has been reading in the newspaper about the ban on the usage of plastic substances. She further finds that despite the durability, the use of these materials has presented mankind with serious waste disposal problem as these materials do not disintegrate by themselves. In view of this, certain polymers are being developed which are broken down rapidly by microorganisms. Shalini feels relaxed that such kinds of biomaterials are being developed.
(a) Name the class of these useful polymers which do not harm the environment.
(b) Give any one example of these polymers and name its monomers.
(c) Comment on the qualities of Shalini.
Answer. (a) The class of polymers is biodegradable polymers.
(b) One example of biodegradable polymers is PHβV (poly-β-hydroxybutyrate-co-β-hydroxyvalerate) The names of its monomers are : 3-hydroxybutanoic acid and 3-hydroxypentanoic acid.
(c) Care for environment, concern for the health of the people.

24. (a) Give a plausible explanation for each one of the following :
(i) Although phenoxide ion has more number of resonating structures than carboxylate ion, carboxylic acid is a stronger acid than phenol.
(ii) There are two –NH2 groups in semicarbazide. However, only one is involved in the formation of semicarbazones.
(b) Carry out the following conversions in not more than two steps :
(i) Phenyl magnesium bromide to benzoic acid.
(ii) Acetaldehyde to but-2-enal.
(iii) Benzene to m-nitroacetophenone
OR
(a) Give a simple chemical test to distinguish between the pair of organic compounds :
Ethanal and Propanal
(b) Name and complete the following chemical reaction :

(c) Draw the structures of the following derivatives :
(i) The 2,4-Dintitrophenylhydrazone of benzaldehyde
(ii) Acetaldehydedimethyl acetal
(iii) Cyclopropanone oxime
Answer.

(a) Ethanal and propanal can be distinghished by iodofrom test.
Ethanal gives a yellow precipitate of iodoform with an alkaline solution of NaOH. Propanal does not give this test.
CH3CHO + 4NaOH + 3I2 → CHI3 + HCOONa + 3H2O + 3NaI

26. (a) Write balanced chemical equations for the following :
(i) Complete hydrolysis of XeF6.
(ii) Disproportionation reaction of orthophosphorus acid.
(b) Draw the structure of a noble gas species which is isostructural with BrO–3.
(c) Considering the parameters such as bond dissociation enthalpy, electron gain entalpy and hydration enthalpy, compare the oxidising power of F2 and Cl2.
(d) Why is Ka2 << Ka1 for H2SO4 in water?
OR
Explain the following :
(a) Hydrogen fluoride is a weaker acid than hydrogen chloride in aqueous solution.
(b) PCl5 is ionic in nature in the solid state.
(c) SF6 is inert towards hydrolysis.
(d) H3PO3 is diprotic.
(e) Out of noble gases only Xenon is known to form established chemical compounds.
Answer.

(c) The bond dissociation enthalpy of F — F bond is lower than that of Cl — Cl bond and hydration enthalpy of F– ion is much higher than that of Cl– ion.
These two factors more than compensate the less negative electron gain enthalpy of F2. Thus, F2 is a stronger oxidizing agent than Cl2.
(d) H2SO4 ionises in two stages and hence has two dissociation constants.
Ka2 << Ka1.
This is because the negatively charged HSO4– ion has much less tendency to donate a proton to H2O as compared to neutral H2SO4.
OR
(a) Due to stronger H-F bond than HCl bond, HF ionises less readily than HCl in aqueous solution to give H+ ions. Therefore, HF is a weaker acid than HCl.
(b) In solid state, PCl5 consists of ions [PCl4]+[PCl6]– On melting, these ions becomes free to move and
hence conducts electricity in the molten state.
(c) In SF6, S is sterically protected by six F atoms and hence does not allow H2O molecules to attack the S molecule. Also, F does not have d-orbitals to accept the electrons donated by H2O molecules.
(d) In the structure of H3PO3, it contains only two ionisable H-atoms which are present as –OH groups thus, it behaves as a dibasic acid.
(e) Except radon which is radiocative, Xenon has least ionisation energy among noble gases and hence it forms chemical compounds particularly with O2 and F2. 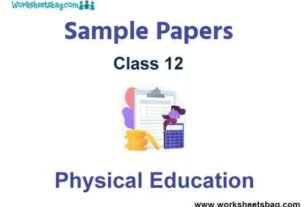